This year’s 5th Ethernet & IP @ Automotive Technology Day was held in Yokohama, conveniently located about 30 minutes south of Tokyo. With about 400 attendees and roughly 30 exhibitors, the event grew again compared to last year.

Consensus at the show was that Ethernet for the car is now really taking off. The applications for Ethernet for in-vehicle communication are broad.

BMW gave an overview of their adoption of Ethernet, first using it in 2008 for updating software in the car, running diagnostics, and private links. In 2011, the scope expanded into using Ethernet for infotainment and driver assist also, and in 2013 BMW introduced Ethernet-based cameras for rear and surround view. At the show, BMW announced that they have adopted Ethernet as their main system bus in the new 7-series vehicles. Other automotive OEMs are quick to follow BMW. Today, Jaguar Landrover, VW, Audi, Porsche, and GM are already also in production with Ethernet-based systems.

In security and surveillance applications, there has been a similar shift toward adoption of Ethernet about 10 years ago. IP-based cameras have now largely replaced traditional point-to-point, coax-based cameras. This paradigm shift has greatly changed common system architectures, and we can expect the same in automotive applications.

Denso, one of the largest automotive components suppliers in the world, in their talk claimed: “In-vehicle Ethernet will be widespread among vehicles, from low-end to high-end”. The Open Alliance, which promotes the Ethernet standards, has grown to 270 member companies. It’s clear that Ethernet adoption in the automotive industry will continue to grow rapidly.

News from the show 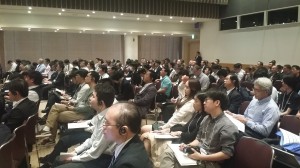 Marvell announced it is sampling its 1000BASE-T1 automotive Ethernet physical layer (PHY) transceiver, which is compliant with the draft IEEE 802.3bp 1000BASE-T1 standard.

In addition, the IEEE task force announced that their 802.3bw 100BASE-T1 standard was ratified, making this the 100 Mb/s single twisted pair automotive communication standard of choice.

The trend toward smart cameras for the car is clear. Whether it’s rear-view, surround, driver monitoring, cross-traffic alert, front-looking cameras, recording applications, or mirror replacement, smart Ethernet-enabled cameras provide a plug-and-play solution. Such architecture doesn’t require a very high-end head unit that does all the processing in a centralized fashion, but instead provides a system where each camera adds processing power and smart driver assistance features to the car.

Videantis presented a talk titled “Video coding and computer vision for automotive Ethernet applications”, focusing on a variety of system design solutions, showing that in order to bring all these smart Ethernet-based camera systems to market, you need a flexible, low-power platform to run the computer vision and video coding algorithms on.

It was great to meet up again with all the key players that are active in this field. We’re looking forward to seeing you at the conference in Paris next year!