We announced the successful closing of a growth-financing round led by eCAPITAL. The visual computing technology of videantis is integrated into intelligent cameras and smart sensing systems, enabling autonomous driving, advanced driver assistance systems (ADAS), drones, novel smartphone cameras, and surveillance cameras. Driven by rapidly growing market demand, especially in the automotive sector, videantis will use the capital to further expand its engineering and customer support teams as well as its global marketing and sales presence. 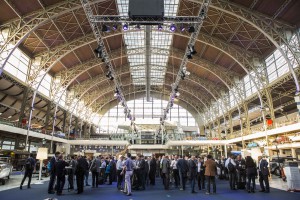 “This was the first AutoSens show ever, but it sure didn’t show,” we wrote last year in our AutoSens show report. A second successful AutoSens show was held in Detroit in May, and in September the who’s who in the world of self-driving cars gathered again at the stunning Autoworld car museum in Brussels.

The five things we learned from the conference are described in more detail in the report, but in short they are: previous years were more about the direction of technology, while now the industry is shifting more toward tackling the details; there’s no one sensor to rule them all; nobody’s making bold predictions on when autonomous driving arrives to the market anymore; besides the drive itself, what will an autonomous car really be like; and that deep learning has quickly become a must-have tool for everyone, not just for intelligent sensor processing.

Autonomous drones counting inventory
MIT’s new solution, called Rfly, allows a drone to read RFID tags without strapping a giant reader to it. Instead, the drone is equipped with a tiny relay, which acts like a Wi-Fi repeater. The drone receives the signal sent from a remote RFID reader and then forwards it to read tags nearby.
Read article

And the Emmy goes to…
HEVC! The Joint Collaborative Team on Video Coding (JCT-VC), a group of engineers from VCEG, ITU and ISO’s MPEG received this key award by the Television Academy for the development of their video compression standard. The academy lauded HEVC’s adoption by all UHD television distribution channels and viewing devices, including traditional televisions, tablets and mobile phones.
See the list of Engineering Emmy Awards